What it Takes to Pull off “Chicago: High School Edition” 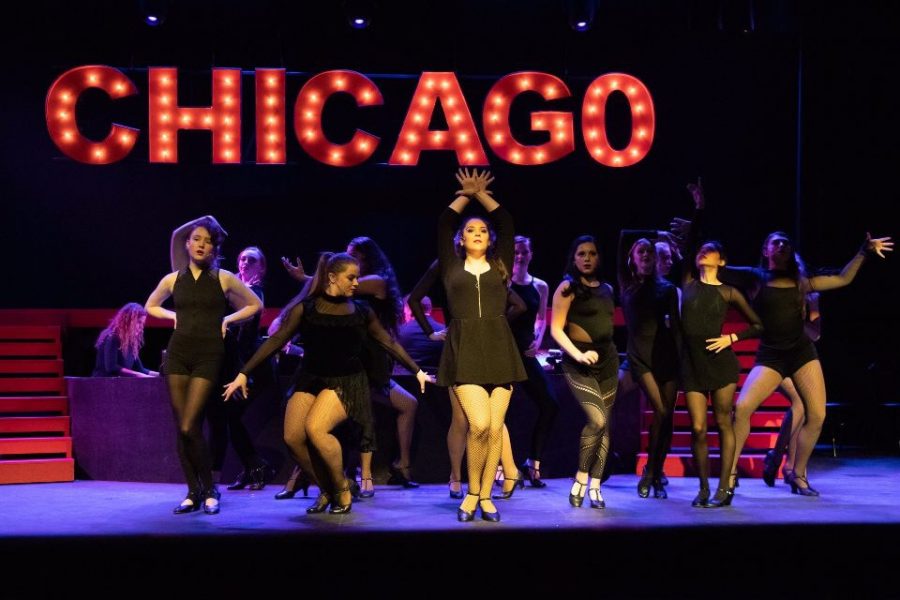 “There is a lot more buzz generated around this year’s musical,” Joe Westermann ‘19, the co-director, said. “People have been talking about it for months since its [announcement]; it is highly anticipated for sure.”

Chicago is an unusual show to perform at the high school level due to its provocative subject matter, so, in order to make it more appropriate, the theatre department, for the first time, is performing a high school edition of a musical. Additionally, the costumes are modest and the choreography has been adapted to include less suggestive movements. Despite it being a high school edition, the basis of the show is still there.

“The main thing this edition did was take things out rather than change things,” Westermann said.

In fact, four musical numbers have been cut from act two, making it shorter than traditional musicals. Usually, these shows are meant to last two and a half to three hours, but this version will last around an hour and a half.

Pulling off Chicago:HSE has, in some aspects, been easier than previous musicals due to the new musical theatre class that began this year at Fort Worth Country Day and the help from various professional guests. Since September, musical theatre students have been working with Ruth Shook, a musical theatre vocal coach, and Caitlyn Carter, an actress in the 90s revival version of Chicago on Broadway, who were both instrumental in teaching the music and choreography to the actors.

“What was going to be the biggest challenge was learning Fosse choreography and all of the music. However… the musical theatre class has been a game changer,” Melodee Halbach, US theatre teacher and co-director of the musical, said. “So, the 16 people in that class were very versed with the music and the choreography style by the time we got to auditions… We’ve never had that before.”

Along with Carter and Shook, Tonya Wathen, who plays Hunyak in Broadway’s “Chicago,” is the dance captain and Roxy’s understudy, also helped choreograph the show. However, Wathen lives in New York, so learning the choreography entailed sending dance and theater teacher Natalie Bracken ‘05 to New York for ten days, renting out a studio, and having Wathen teach Bracken the entire show in that brief time period. Later, Wathen flew down to FWCD for auditions week and was instrumental in casting. All of this was made possible by a grant from an FWCD parent who wishes to remain anonymous.

However, there was also a unique set of challenges that the theatre department had never encountered until this musical production. According to Westermann, the biggest challenge has been controlling the excitement for this musical and the pressure for the entire cast and crew to live up to the high expectations that come with performing a highly distinguished musical such as Chicago.

“Managing the hype has been a challenge because it hard to [live up to] that expectation from the movie Chicago winning best picture at the Oscars,” Westermann said. “For the cast [the challenge has been] getting into the heart and minds of these characters. They are hard characters for teenagers to portray.”

Furthermore, there are stringent rules regarding videotaping rehearsals due to copyright concerns, that have challenged the cast and crew. In fact, Halbach had to sign an eight-page contract from the producers of Broadway’s Chicago that specified guidelines for videotaping and photographing the musical. Some of these rules state that audience members are not allowed to videotape the show, and the cast and crew cannot take pictures during rehearsal and post them online or else they will be fined $10,000.

“We usually have no qualms about videotaping and teaching choreography. If I didn’t have to sign that contract it would have made it so much easier because there would have been a video of [Wathen] doing the choreography. Our access and ability to teach has been limited,” Halbach said.

This musical is the first time that audience members will be able to sit on stage with the actors. Additionally, the orchestra will also perform onstage.

Chicago is also the last musical for both Westermann and Halbach. The pair have always had a strong relationship since Halbach took Westermann under her wing his freshman year as a theatre student. Westermann credits Halbach with his love for directing theatre, and he will pursue this passion at The New School in New York beginning this fall.

For their last musical together, the pair are co-directing the production. Halbach is specifically in charge of staging the production, while Westermann has been focusing on characterization, working on an individual basis with each actor to help them embrace the character they are playing.

“It’s really hard for me to think that I’ll be working in different and new environments once I get to The New School but this one [at FWCD] will still continue long after I’m gone. I’m glad that I’ve been able to progressively let it go and not let it all go at once. I can only hope I find the same type of family and energy that I’ve experienced at FWCD at The New School,” Westermann said.

If anyone is on the fence about attending this year’s musical, Westermann’s advice to those few is: “If you’ve never come to see a musical, this is the one to see. Get it while it’s hot.”