Author recalls his quarantine from 2019 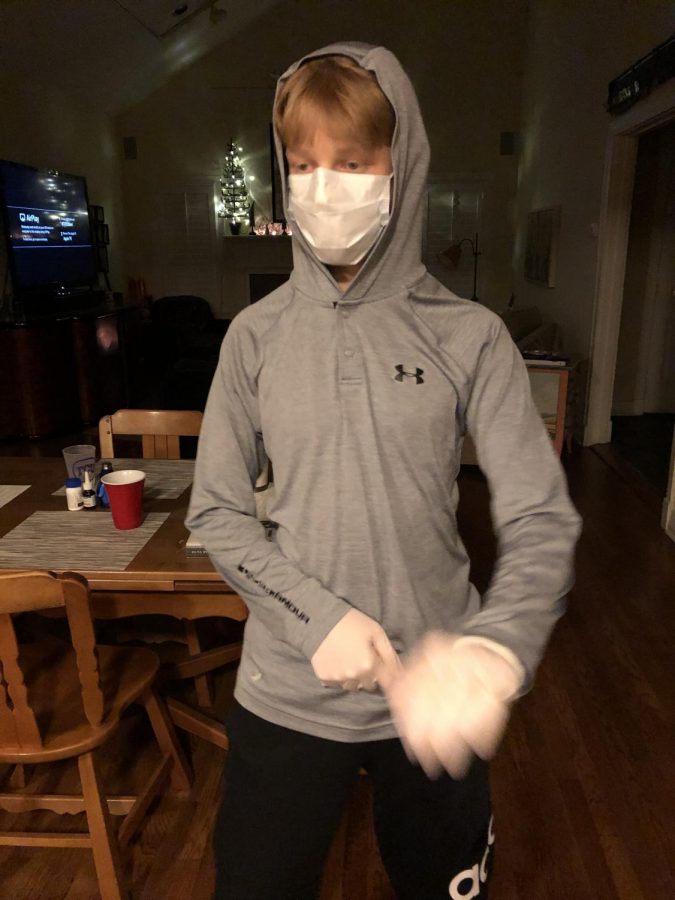 Contrary to popular belief, this photo of Marshall Lehman was not taken in 2020, but in January 2019 after his famous Flu Game.

I woke up one cold, winter Saturday with a pain in my throat. As I got dressed for a basketball game later that morning, I voiced my concerns to my father.

“Gargle some salt-water. You’re fine,” he replied, believing my claims to be the whines of an unathletic middle schooler attempting to avoid physical activity.

Eventually, we arrived at the gym, and I began to warm up with the team. Not even three steps into a jog, my throat constricted.

“I can’t breathe,” I wheezed to my coach.

“Run it off. You’re fine,” he said as I am pushed onto the court for the start of the game.

I played the whole game holding my breath and desperately gasping for air when I was rewarded with sitting on the bench. For the first time in my life, I was happy that we lost a game because it meant that I could crawl into bed and sleep off my sore throat. With a dream of hibernation, I frantically untied my shoes, then I heard my friend utter the sentence that still haunts me to this day.

“You know we’ve got another game, right?”

My blood ran cold. He couldn’t be right. We can’t have another game after I almost died three minutes into the first one. My worst fears came true as the scoreboard reset. I took a sip of water and signed my final Will and Testament.

I took to the court once more feeling horrible. My throat ached and my head throbbed, but as my coach so eloquently put it, “He’s the only kid above 5’5”.” So therefore it was imperative that I played.

After two hours of basketball, my parents were shocked that my symptoms had not gone away. My mom gained a little sympathy for me as she drove me to the doctor because I was coughing and wheezing the whole ride there.

When we arrived at the doctor’s office, we waited patiently until we were called back by a nurse. She went through the regular procedures, measuring my blood pressure and asking why we’re here today, and I gave an exaggerated depiction of how my parents forced me to play in two basketball games with no oxygen passing through my lungs.

The nurse waited patiently for me to finish my story of terrible parenting, then she said, “Well, let’s test for the flu. It is a prime time to develop it.”

In addition to testing for influenza, I was also tested for streptococcal pharyngitis, or Strep Throat. I felt like a dying lab rat anticipating the test results. After 15 minutes, which felt like an eternity, the nurse returned.

“I’ve got good news and bad news. Good news is you don’t have strep,” she said.

“Fantastic! So what’s the bad news?” my mom asked.

“He has the flu,” the nurse responded.

Needless to say, I immediately threatened my mom with a child endangerment lawsuit, which was quickly dismissed. I then wondered if I had made any of my teammates sick (I could care less about our competitors because we were coming off a losing season). I got to stay home from school, missing time with my friends and Spanish tests.

With COVID-19 in the air, let’s learn from my parents’ and my own mistakes. If you feel sick, get tested. Don’t endanger others’ health just because you have a 9 a.m. basketball game.