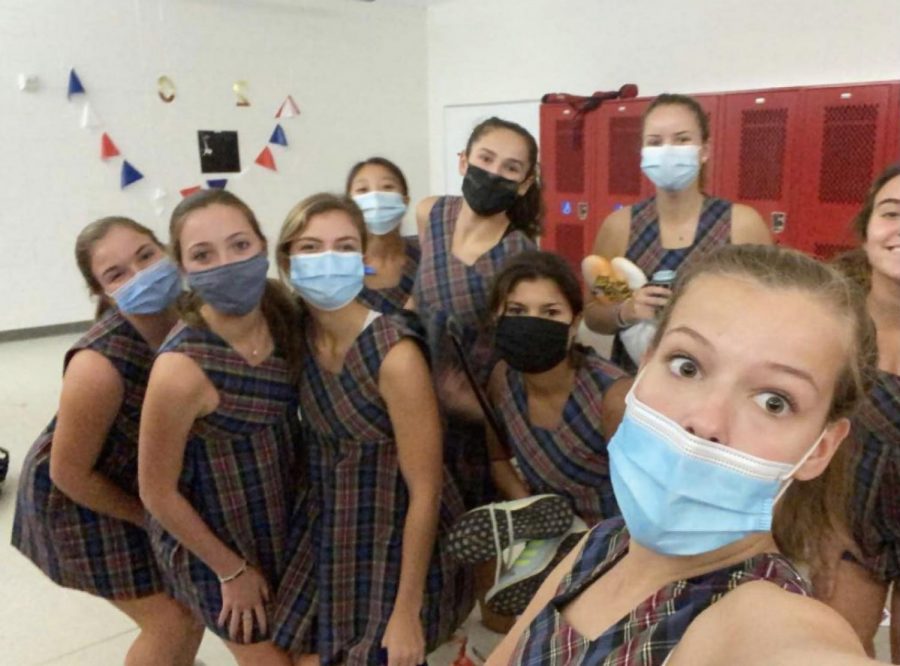 Seniors pose for a picture in their jumpers before practice

With the Fall sports season coming to an end, the seniors are feeling nostalgic as they look back on their four years of field hockey fun in high school. With such a small group of seniors on the team, they have collectively created so many fun memories and tight bonds. Emi Carson ‘21, Emma Pyron ‘21, Abigail Woodcock ‘21, and Ileana Rodriguez ‘21 were the only four seniors on the team this year, which is the lowest number of seniors ever on the field hockey team at FWCD.

Pyron, Carson, and Woodcock have all been playing field hockey for six years. They started together in seventh grade and played throughout all four years of high school. Starting in seventh grade, they were coached under Coach Mike Vincent and Coach Rob Napier in eighth grade. Tara Gordon ‘12’ and Program Director Paige Chisholm ‘87 coach the Upper School varsity team.

Pyron has participated in the University of North Carolina’s field hockey camp for four years and the Pride Field Hockey camp for two years.

“Field hockey has been a pretty big part of my life for a while,” Pyron said. “It’s always something that I look forward to after a long day at school. Some of my favorite memories from field hockey are traveling to Houston and Oklahoma for games with my team. I’m so grateful for the FWCD field hockey program because of the bonds that it allowed me to create with my team.”

Carson said field hockey was a large part of her life and she’ll miss it.

“I came to FWCD in seventh grade, so playing field hockey was one of the first ways for me to meet new friends and create bonds,” Carson said. “I have played in camps like UNC and Cowtown Field Hockey, and my favorite part about playing is traveling on long bus rides with my team.”

Woodcock is grateful for her FWCD field hockey experience for many reasons, one of them being the bond that is created between the different grades.

“One of my favorite parts about playing field hockey in high school is how fun it is playing with my friends and creating such close relationships with the coaches,” Woodcock said. “My favorite part about the program is the connections that it allows us to make.”

Rodriguez has a little bit of a different story than the other seniors on her team. Rodriguez came to Fort Worth Country Day in eighth grade and had never actually played field hockey before then. Rodriguez also had an injury sophomore year that prohibited her from playing for an entire season. After only three years of playing field hockey in school and out of school, she fell in love with the sport and is excited to go on to play for Haverford University with their well-known field hockey program.

“I have played at FWCD for three years, and I’m part of the Lone Star club team,” Rodriguez said. “I’m so glad that I came to Fort Worth Country Day and started playing when I did because not only would I have missed out on such fun times with my friends playing sports, but I also wouldn’t be going to college for field hockey.”

“I loved getting to play with and getting to know the seniors on the team. I have so many fun memories with some of them and I’m sad that the season is over,” Todora said. “They were all always so sweet and inclusive, which was nice… I became close with some of them through practices, games, team dinners, and rides they would give me home from practice. I’m so excited to see where they all end up next year and I’m really glad that I got to know them through field hockey.”

For many players, the Fort Worth Country Day Field Hockey Program has been a major part of their high school careers. Some turn to the program for a sense of stress and fun with friends after a long day of classes, and some are there to better their skills in the sport. But in all, the program has created deep friendships between players, and has provided not only a support system between players and coaches, but a sense of community and family for everyone who participates.