Taco Bell vs Taco Bueno: A Quills and Answer Extension 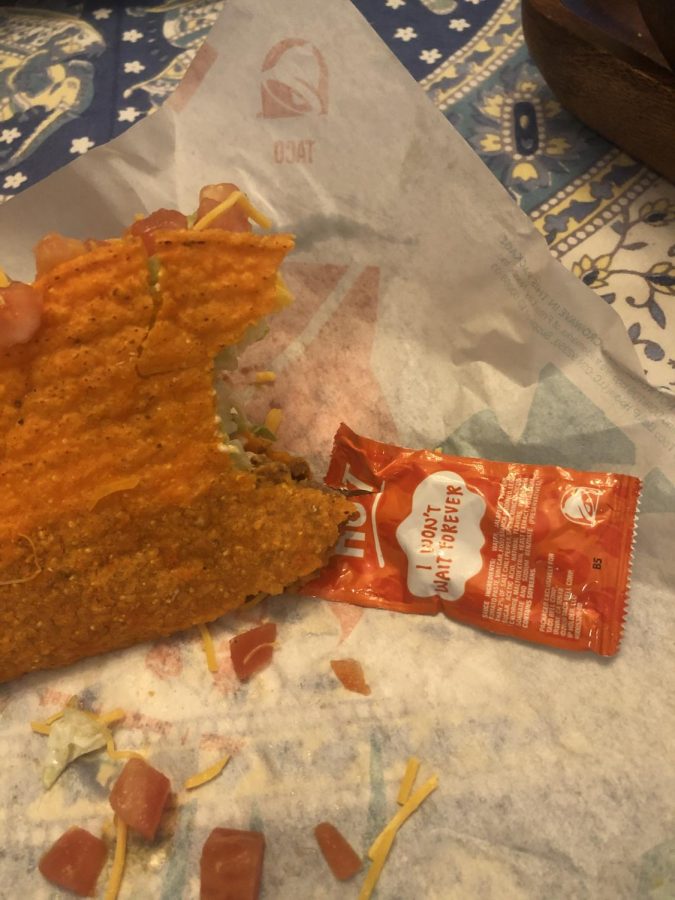 Do I really have to do this? I have to choose between the two brands that encompass the epitome of mediocre Tex-Mex. Honestly, there are so many places that you could go to for Tex-Mex food. There’s Rosa’s, Freebirds, Chipotle, and so many others. Why would anyone go to either Taco Bueno or Taco Bell? So that’s why I went to both.

Taco Bell
The little Mexican village known as Taco Bell is part of a chain based in Irving, California. Taco Bell’s parent company is Yum Foods! which also owns KFC. Taco Bell is known for Mexican fast food that is well-reputed around the county for its quality food. I had never previously been to Taco Bell because of my parent’s disapproval, but I have to be honest, I was quite curious about what was in store. At Taco Bell I bought four things: a DoritosLocos taco, a shredded chicken burrito, Dragon fruit Freeze, and a Baja Blast.

I first started with the Doritos Locos taco. Now, what is a Doritos Locos taco? Think of a taco, but instead of a hard shell, how about a Dorito shell? The Dorito Locos taco is made up of “beef,” lettuce, and cheese inside of a Dorito shell. The Dorito taco was pretty substandard, to be honest. The condiments were fine, but the beef had a weird texture to it. I don’t know what it was, but it wasn’t my style. Part of the issue I think is that the beef isn’t 100% beef, which may piss people off who are desiring “clean” beef. Outside of the fact that the beef isn’t totally beef so to speak, the Dorito shell is actually quite underwhelming. When you take a huge bite through everything, you don’t actually taste the Dorito flavoring mixing with all of the other ingredients, which is incredibly disappointing. You would expect a different flavor to come from it, but the Dorito flavor never comes in. Overall, the taco was kind of disappointing and not really value for the money, either.

Next came the shredded chicken burrito. The base burrito contains shredded chicken, rice, cheese, and avocado ranch sauce. The burrito was kind-of disgusting. It was edible, but while the texture improved, the taste didn’t. The texture is that desirable, gooey cheesy inside with tender chicken, but the flavor was really off. I’m pretty sure it was the ranch that was throwing off my taste buds. The taste was indescribable. I didn’t finish the burrito and just threw it out. Now you can get the Taco Bell shredded chicken burrito without the ranch, but overall, the entire concept was pretty sad.

Finally came the drinks, which were personally my favorite part of the meal. I got two drinks. The first was just a regular Baja Blast. The Baja Blast is a tropical Mountain Dew flavor that is practically exclusive to Taco Bell. It was previously available for a limited time in stores but now can only be found at the little Mexican cantina.  Now the drink is incredible. It tastes really refreshing with a tropical essence. Now aside from the fact that the drink was really unhealthy, it tasted ridiculously good. I’d honestly go back and get our sip.

The final drink is the Dragon Fruit Freeze. This item, also exclusive to Taco Bell, was released just in late September in Taco Bells across the country. Dragon fruit is tropical fruit most typically enjoyed in Asia and grown in tropical regions. The Dragon Fruit Freeze is a white-colored slush with splashes of reddish-pink syrup; although, there is an option to get it without the syrup. I got the freeze with the syrup, and it tasted fantastic. It has a really tropical and fruity taste. Although, we should remember that it’s another very chemically processed drink. But if it tastes good, it tastes good.

Taco Bueno
Taco Bueno is a Tex-Mex chain based in Farmer’s Market, Texas in the DFW metroplex. The brand was formerly owned by Carl’s, Junior but is now owned by Sun Holdings. Taco Bueno is viewed as being somewhat higher quality when compared to Taco Bell in some circles, so I decided to put it to the test. At Taco Bueno, I bought a quesadilla, four tacos (two chicken and two beef), and a bean burrito. I did not review any drinks as Taco Bueno does not have any “specialty drinks” like Taco Bell.
The quesadilla was fine. There wasn’t anything to write home about it. It was just cheese on a tortilla. My major qualm has to come with a discrepancy in the menu, however. The menu on the Taco Bueno website conflicted with the menu at the Taco Bueno establishment with no choice for a chicken quesadilla even though it explicitly said on the website that there was one but it is what it is.
The tacos were ok….The beef tasted wonky just like the beef from Taco Bell. Just a sort of low-grade beef shredded down to where there’s no texture. The veggies on top are fine but all together it definitely sucks. The chicken was definitely better as it had a bit more flavor and was a bit more flaky like real chicken. It’s the better option of taco for fast food; however, the composition of the taco as a whole is still underwhelming.
Overall Taco Bueno is just a slightly better fast food version of Taco Bell, without any of the pizazz of corporate sponsorships.

Both are not the best option. Even though the food at both ventures is at an affordable price point, I’d still rather eat at other fast-food ventures or at home. The high points for Taco Bell were the drinks that show the true creativity that Taco Bell has in that department. Taco Bueno, while less radical with its approach to food, has slightly better food quality than Taco Bell. However, these are not the ideal places you would want to go through. Sure, we may be Tex-Mex snobs, but hey, we got standards. Just go to Taco Casa or something like that. Please.