It’s the Worst Score in Tennis, the Double Bagel 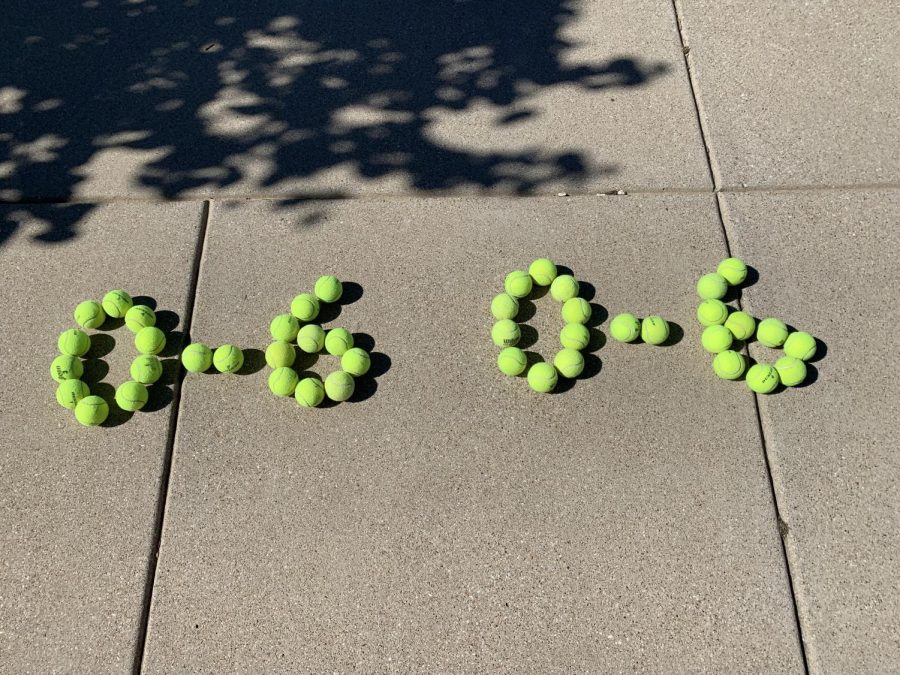 This was the final score of my tennis match, and just to rub it in to myself even more, I wrote out the score with tennis balls.

It was a bright and sunny day. The air smelled like artificial cheese and citrus. This confused me at first, but then I looked over to my right and saw the snack bin filled to the brim with Cheez-Itz and oranges. I decided to go over and grab some Cheez-Itz, definitely a very nutritious snack, before running around on a tennis court for a little more than an hour.

I turned back around as Varsity Boys’ tennis coach Sil Azevedo called the tennis team together to name the matchups for the match against TVS that day. The FWCD boys’ team had already lost to TVS two matches to six matches the week before and were looking for an upset this time around. As I waited for my name to be called, I felt a large gust of wind against my face and immediately knew it was going to be a tough match. Little did I know how tough the match was going to be.

My name was finally called, and I met my opponent for the first time. He was much taller than me, but that wasn’t a surprise. We arrived at the court, and things already started to go downhill. As I set my water bottle down, it tipped over, and water spilled all over the side of the court.

“I can’t even win against my water bottle, so how am I going to beat a six-foot plus experienced tennis player?” I thought to myself.

I started to warm up with my opponent and was feeling a little bit better before the match, but then the match began.

Bam! My opponent’s first serve careened off his racket, kicked off the line of the service box, nicked the edge of my racket, and banged off of the fence behind me. I tried to regroup after the first point, but my opponent’s serve continued to hit with power, and even when I returned the serve, he would just blast the ball past me.

“I’m down zero to one, but it’s my serve and I can come back,” I told myself as I headed over to the bench.

The next game I put my first serve in the service box, but my opponent returned the serve to the backhand corner. I ran after the ball, wound up to blast a winner down the line, and then the ball went into the bottom of the net.

“Great shot,” I told myself sarcastically. “Maybe next time I can hit the ball under the net.”

I walked over to the back fence to try to calm myself down before the next point, but it didn’t end up working.

“Out, out, out,” my opponent said as I hit a forehand wide, a forehand long, and then another backhand into the net to end the game.

The next four games didn’t go much better as my opponent continued to hit massive serves and return my serves with ease. The last shot of the set ended with me hitting a forehand into the net because I had to change it up from hitting a backhand into the net.

I walked back to the bench again so I could try to regroup before the second set. I took a sip from my water jug, placed it back down, making sure not to spill it a second time. I stood up and walked over to the back fence, which was becoming a familiar sight for me.

“Time to come back,” I said to myself. “Let’s get this match to the last set tiebreak.”

I believed this at first, but the second set continued just like the first. Pretty soon the only words that I seemed to hear were “out” from my opponent and “you got this,” even though I didn’t, from the few people still watching the match. Just a few minutes later, I was zero to five down and love to 40 down. I looked to my right and saw pretty much everyone who had been watching my match up until that point get up and leave. It made sense, and as I turned my head back to the court, my opponent served another big serve, to which I hit the ball into the net one last time. Final score: 0-6, 0-6.

“The dreaded double bagel,”  I thought as I shook hands with my opponent at the net and congratulated him on a good match.

Now, why does tennis relate certain scores to food, like a score of 0-6 is a bagel and a score of 1-6 is a breadstick? Well, it’s pretty much because the number zero looks like a bagel and the number one looks like a breadstick. These terms can also be used to describe the score for a winner or loser of a match. If someone loses by a score of 0-6, 0-6, like I did, then they got double bageled, while the winner double bageled their opponent.

I would have actually much rather been given two bagels instead of losing by that score, so I wasn’t too happy as I grabbed my tennis bag and headed off the court. However, I was reminded after the match that even though I lost, I got the experience versus a strong player. I improved after that match as well. Then, after the loss, I went into the next match more prepared, and even though I lost again, I played much better that time around. Finally, when we played Oakridge, I pulled off a victory in the tiebreak, which was an incredible feeling after losing the previous two matches. When I boarded the bus after the match against Oakridge, I knew that I had improved since the previous week and that I would only continue to get stronger, even in defeat.