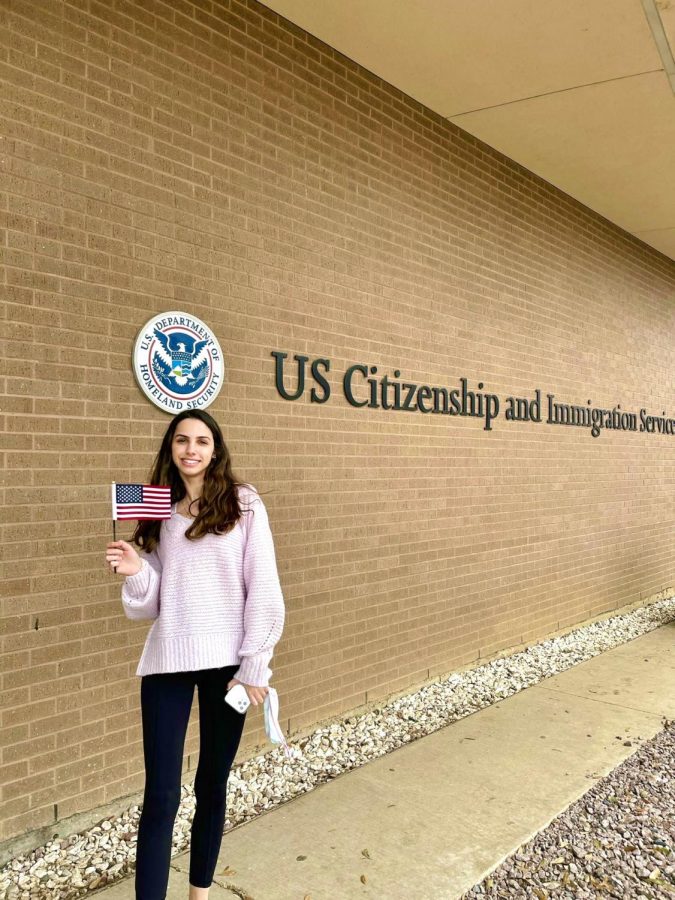 Jacqui Cook '22 celebrates after getting her US citizenship.

Jacqui Cook, a current junior at FWCD, has been part of this school’s community for seven years, joining the class of 2022 in the fifth grade. Many people know her from her involvement in Student Council, Team Service, or the yearbook staff. Others know her for being a co-president of the FWCD Cooking for A Cause Club or for being a co-president of the FWCD Sigma Iota Sigma chapter. However, few know that Cook has literally made her way around the world before making her mark on FWCD.

Cook’s mother was born in Cairo, Egypt, and her father is originally from Melbourne, Australia. Because of her father’s job, Cook and her family have moved several times throughout her life, having lived in cities around the world.

Born in Melbourne, Australia, Cook lived there until she was a year old, when her family first uprooted their life to move across the world. Moving to the United States, Cook and her family settled in Houston. However, after only a few years of living in Houston, they moved once again across the world, this time to Kuala Lumpur, Malaysia.

“I loved being able to experience the different cultures in each country and just see how different they were,” Cook said.

After living in Malaysia, Cook and her family then moved to the United States for the second time, to Bakersfield, California. Then from Bakersfield, they moved to Fort Worth, where Cook started the fifth grade at FWCD.

“It was obviously hard moving so many places, but the fact that I haven’t moved in high school has made it a lot easier,” Cook said.

Since Cook was born in Australia, she has citizenship there, but it was not until this year that she obtained her official US citizenship. Cook explained that she wanted dual citizenship so that she could continue living in the US and not have to renew her green card every year. She also remarked on how having her citizenship would make traveling a lot easier in and out of the US.

“I knew I was going to get my US citizenship, but it’s been about a year-long process in obtaining it,” Cook said.

Since she’s under 18, Cook explained that her parents, who also obtained their citizenship this year, were able to help her with most of the paperwork. Her experience, being a minor, has been a lot different than her older sister’s experience in obtaining US citizenship.

“I just had to sign paperwork and wait awhile, but for my sister, it’s been a lot harder just because she’s over 18 and has to go through the actual process of taking the citizenship test and everything,” Cook said.

Since obtaining her US citizenship, Cook now has dual citizenship in Australia and in the United States. Cook then commented on whether or not she would ever move back to Australia.

“Probably not until after I graduate college, but yes, maybe when I’m older,” Cook said. “I have a lot of family that lives there [in Australia], so I will definitely visit a lot.”

Because of her family in Australia and her many moves across the globe, Cook has been able to create friendships and relationships with people everywhere.

“Now, I have friends from around the world, so I think that’s probably the best thing that has come from every move.”