FWCD and TVS Leave SPC for the More Attractive TAPPS 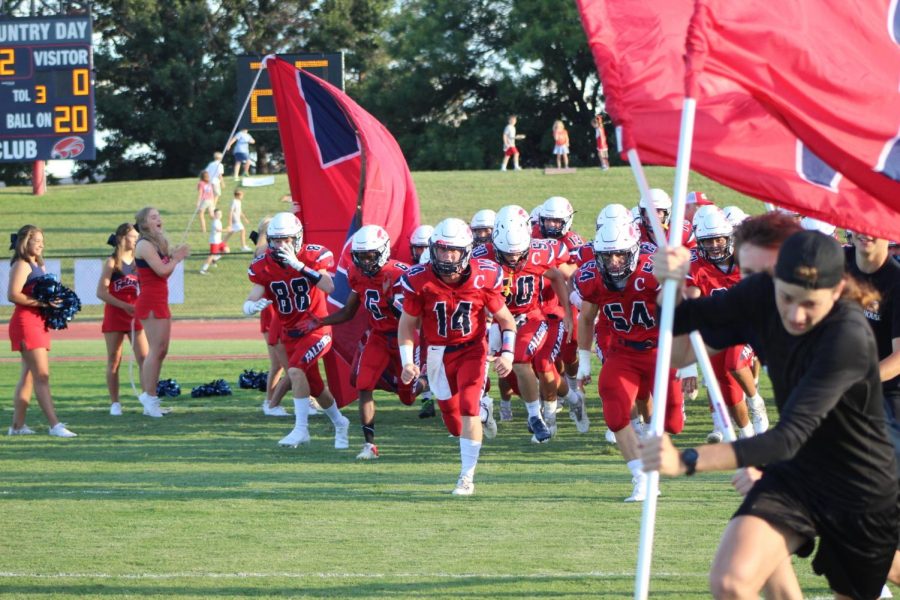 The FWCD football team charges onto the field before being defeated by St. Marks, 106 to 2.

Early in the summer, the Instagram account, Fort Worth Country Day Barstool, made a post entertaining an idea once believed impossible. The post included an image depicting the Southwest Preparatory Conference school banners removed from the square gym walls, revealing the cement brick wall that laid beneath them.

For weeks the question “Is FWCD leaving SPC?” never left people’s minds. FWCD Grade GroupMe chats were consumed with lively debates of where FWCD would take its talents and how easily they could dominate The University of Alabama in football if a move to the SEC was possible.

“Man, I know we haven’t won a conference game in four years, but we can still outscore Gonzaga by 90,” Country Day’s basketball prodigy, William White, said.

Everyone’s eager chatter quickly turned into screams of joy when on the morning of July 30, Greenhill’s The Evergreen published an article detailing conversations between Fort Worth Country Day, Trinity Valley School, and the Texas Association of Private and Parochial Schools. Several months after FWCD’s 2019 SPC Football Championship, TAPPS came into contact with FWCD and TVS with the intent of improving their academic reputation among other high schools, along with more competitive athletics. Although both SPC schools were interested in a change of conference, it wouldn’t be feasible due to their $34 million contract securing them as an SPC school till 2024.

With an over 30 million dollar roadblock in their way, FWCD and TVS began searching for alumni who would sponsor a buyout from their contract with SPC. Just two hours after the call of help was sent out, FWCD had accumulated their $34 million; however, the administration decided to spend the check on new pavement instead of the contract buyout.

The school was outraged. The student’s shiny new conference had been ripped out of their entitled hands.

Before hearing of the Board’s use of the donations, Athletic Director Lesslie Cube hired Toby “Dry Ice” Cool as Head Football Coach in hopes of immediately boosting the caliber of FWCD’s football program in preparation for the move to TAPPS. What Cube failed to see was that it didn’t matter if there was a fresh coaching staff, there still wouldn’t be an efficient football team. Sure, there was an all SPC O-Linemen, but there was no experienced quarterback or running back taller than 5’5”, or even a healthy wide receiver. But, I mean, what can you do when your quarterback is also your kicker?

TVS’ athletic program wasn’t doing much better; however, their Debate and Spelling Bee teams were having outstanding seasons. They repurposed their weight room into an indoor mega chess set. The concept of physical competition had left their brains and was replaced with the correct spelling of soubrette.

With both FWCD’s and TVS’ respective athletic programs unprepared for the cutthroat TAPPS conference, they decided it was in their best interest to rebuild their athletic teams for the remaining three years until their contracts with the SPC expire. As the excitement of a new conference settled into everyone’s brains, questions began to arise about how this change came to fruition. The biggest question, though, was, what does “parochial” mean in the TAPPS acronym? A quick search on Merriam-Webster.com will reveal that parochial means related to the Church.

When Cube was asked about TAPPS being an exclusively pious school conference, he simply responded, “I believe that our athletic program is greater than religion, like all other Texas schools do.”

One aspect of the switch to TAPPS that everyone is excited about, is the rebirth of FWCD’s rivalry with All Saints’ Episcopal School. Whether Football, Basketball, Cross Country, or Tennis, the student section will be chaotic with school spirit. After 10 long years, The Sleepy Panther Smackdown will be reinstated as the most premier high school athletic rivalry.

There is more excitement surrounding Northeast Texas Preparatory High School athletics than ever before. As students of FWCD, we are lucky to be living in a time of such immense change. We, as a community, finally have the privilege to watch our school compete against (and have the pleasure of being blown out by) the best sports teams that Texas private schools have to offer.